The Donald W. Reynolds CC & Library was funded by the Donald W Reynolds Foundation, a national philanthropic organization founded in 1954 by the late media entrepreneur for whom it is named.

Headquartered in Las Vegas, Nevada, it is one of the largest private foundations in the United States and has contributed over $270 million to organizations in Oklahoma. The beautiful facility was dedicated on May 25, 2011 with over one thousand people present. 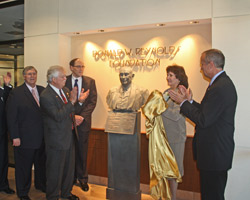 Former Library Director Dr. Dottie Davis gives Mrs. Moore credit for her input on the architectural plans for a new library that were drawn up in 2003, and for her later assistance during the city’s application process for the Reynolds Center.

In 1914 the first library was established as the Mothers Club and library in Durant by the Fortnightly Club.  Many citizens worked to acquire a Carnegie library grant. When these efforts failed the city fathers followed up on their vote to establish a library, appointing a library board and leasing property at Fourth and Beech.  However, that plan for a public library seems to have then languished until late 1925, when prominent Oklahoma politician Robert L. Williams—who had lived for a time in Durant—purchased part of the leased location and donated it to the city for use as a library.

Williams’ law partner in Durant was W. E. Utterback, who served as chairman of the first library board. Other members of that board of trustees, which set a pattern for later boards, were: George C. Pendleton, secretary; S. C. Boswell; Mrs. Vera Connell Bennett; C. O. Johnson; and Dr. W. B. Morrison.

The official opening of the Robert L. Williams Public Library was September 15, 1926.  Funds for book purchases were meager at first, but with volumes from Williams’ own library, and with contributions from business firms, men’s and women’s civic clubs, and many individuals, the library housed several hundred volumes—many second-hand and somewhat dog-eared—at its opening.

New Building in the Great Depression

It was during the Great Depression that the small, four-room frame house at Fourth and Beech was replaced by a stately $30,000 stone building at the same location.  Construction began in 1936 with aid of a $20,000 federal-government grant through the Works Progress Administration (WPA). To comply with federal requirements, bonds for the remainder of the building’s cost had to be voted by city taxpayers.  But Judge Williams sponsored that effort, pledging to pay the bonds and interest himself as each matured.  Not surprisingly, the bond issue passed.

The stone building was completed and dedicated on July 11, 1937, with distinguished guests including Williams and Gen. W. S. Key, Oklahoma WPA administrator. W. E. Utterback gave the dedicatory address. A large crowd, many of them children, awaited the new library’s opening that day. Miss Mary Claude Park checked out the first book. Williams’ support of the library bearing his name didn’t end at his death in 1948. A trust created in his will paid off all remaining bonds with interest, 11 years earlier than required, and also financed a 1955 addition that enlarged and modernized the facility.

In 1987, the library’s collection was moved to the vacated Durant Bank & Trust Building at Second and Main for a year while its facility at Fourth and Beech was again expanded. Funds from the Williams Trust and a grant from the Oklahoma Department of Libraries paid for that addition.

While the collection was still in its temporary quarters, the J. C. Penney building next door burned and did extensive damage. The library moved back to its remodeled Fourth-and-Beech location in 1988.

The Friends of the Robert L. Williams Public Library group was formed in 1987 to support the library in many ways, including purchasing needed equipment not covered by the library’s budget, manning the circulation desk when staff members attend training sessions, and delivering books to nursing-home residents. The Friends also sponsor the Summer Reading Program for area children and Book Talk, a monthly book-discussion group.

Computers and the Internet

In 1991, the library added its first computers, library employees entered book records into an electronic database, and the card catalogue became available on the computer. Then in 1993, a circulation computer and an automated circulation system (with bar codes on books and on borrowers’ ID cards) were added to the library. Mary Claude Park (who had checked out the first book when the stone library building was opened in 1937) again checked out the first book using the automated system. In 1995, two new patron computers allowed searching for books in the library’s collection, and the physical (paper) card catalogue was removed.

Grants from various agencies have assisted the library over the years with purchasing equipment, materials, and services. For example, the library’s portion of a 1997 grant from the State Commerce Department to the Durant Chamber of Commerce provided internet service to library patrons for the first time.

Individual citizens of this area have also contributed generously over the years, regularly donating used books for the Friends of the Library’s annual sales and its continuing book-sale shelf at the library.

In 2008 the City of Durant received nearly an eight million dollar grant from the Reynolds Foundation to build a new community center and library. The new facility has approximately 30,000 square feet, two large community meeting rooms, a café, computer instruction lab, public use computers, and is equipped with high speed internet access, WiFi, along with an expanded staff.

In May 2011 the library moved to the new location at 1515 West Main Street and the name was changed to the Donald W. Reynolds Community Center and Library.

The Donald W. Reynolds Foundation is a national philanthropic organization founded in 1954 by the late media entrepreneur for whom it is named. Headquartered in Las Vegas, Nevada, it is one of the largest private foundations in the United States.